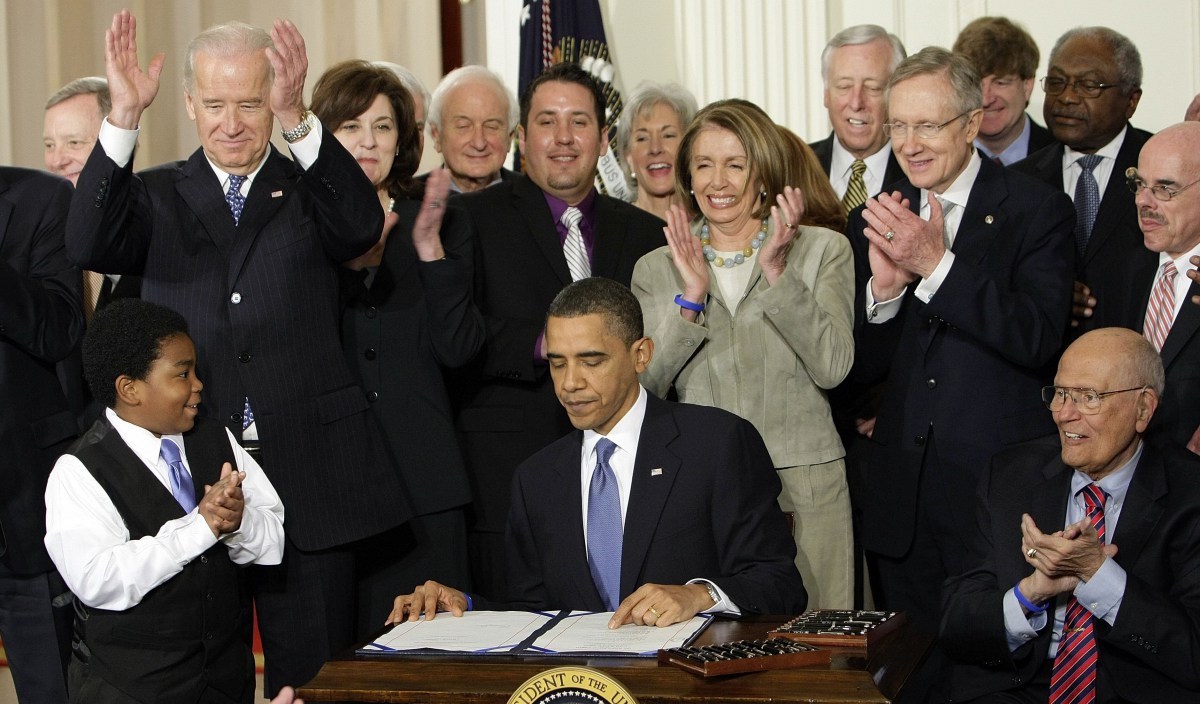 The November 6 Midterm Elections and Their Impact on Obamacare

The November 6 Midterm Elections and Their Impact on Obamacare

A Q&A on the ACA and the upcoming elections

This straightforward question has a very simple answer: It depends on the results of the upcoming November 6 U.S. congressional elections.

If the Republicans retain control of both the House and the Senate, the probability that the ACA will be repealed is very high: The Republicans would be emboldened by such a victory and would most probably attempt in 2019 to repeal the health care law—again. It is worth remembering that in July of last year, the repeal of the ACA (a version of which had passed the House in May) was defeated in the Senate by the narrowest of margins, because three Republican Senators, Susan Collins, Lisa Murkowski, and the late and much regretted John McCain, voted against the repeal. This is very unlikely to happen again, although one would also have to consider the margins by which the Republican would have gained control both Chambers after these November midterms. In July of 2017 the Republicans held a 52-48 advantage in the Senate. Given ever-increasing polarization, such a margin, plus Republican control of the House, would likely spell the end of the ACA in 2019—including the end of its very popular provision that guarantees affordable coverage for those affected by pre-existing medical conditions.

If the Democrats gain control of either the House of Representatives or the U.S. Senate, then the ACA will remain the law of the land. The only issue in the horizon will be the lawsuit filed in February of this year by a coalition of 20 states, led by Texas and Wisconsin. This lawsuit claims that Obamacare is no longer constitutional after the Republicans eliminated in December of 2017 the tax penalty associated with the ACA’s individual mandate. The 20 Republican attorney generals argue that without the tax penalty, Congress has no constitutional authority to legislate the individual mandate. Even if this case reaches the Supreme Court, one has to remember that the Court affirmed twice the constitutionality of the ACA, in June of 2012 and then 2015, with Chief Justice John Roberts voting with the majority on both occasions.

The answer to this question has to be more nuanced: What will happen this year on the ACA healthcare exchanges can only be predicted at this stage, because the enrollment period for the 2019 ACA plans available on the exchanges is just starting—it runs from November 1 (October 15 in California) to December 15. Let’s start by what we do know:

Now for what we don’t know:

How will the above changes to the ACA affect the cost of insurance on the exchanges? My prediction is that these costs will not change much, and the number of available insurance plans in the exchanges will actually increase.

Why do I say that? After all, one theory is that many healthy and low-income people will choose some of the new, low cost and non-ACA compliant plans now on offer. This will mean that there will be fewer people buying coverage on the exchanges, and that these people will be less healthy on average. Insurance companies selling plans on the exchanges will thus have to raise their prices—a negative consequence for those who buy insurance on healthcare exchanges.

Ah yes, but that is the theory. Actual events have taught us that a few facts run counter to this argument.

First, we have the actual 2017 ACA exchange enrollment data. Despite the Trump administration cutting funds for advertising and outreach to the exchanges by 90%, enrollment essentially stayed flat: According to the Henry J. Kaiser Family Foundation, 11.8 million Americans purchased coverage on the exchanges for 2018, versus 12.2 million enrolled in the ACA in 2017, and 10.4 million in 2016.

Second, the new low cost and non-ACA compliant plans are still in early stage, far from representing an option for lots of people, and there are many concerns about their quality—this despite the Trump administration’s efforts to promote them. Some people may also elect not to have any health coverage at all, but in all likelihood there will not be enough of them to affect pricing on the exchanges significantly. Preliminary data state-by-state appears to confirm this, showing decreases in premiums in many states, including double digit percentage declines in several instances, compensating in some way for the widespread price increases seen in 2018.

Third, all the subsidies available for low-income families and individuals under the ACA remain in place, which means that people who qualify for the subsidies will not pay more than today. Preliminary data also shows new insurers entering the exchanges, unlike what was seen in 2017: Increased competition will on average lead to lower prices, significantly so in some places.

The reality as shown by the above figures is that there is a large number of Americans who want both quality and affordable health coverage, despite ongoing efforts by the Trump administration to derail the ACA.

Specifically, the Republican tax bill signed into law on December 22, 2017 repealed the tax penalty one would owe under the ACA if one failed to maintain “minimum essential coverage.” This action did not end the ACA, not even its mandate to purchase health insurance. Yet, on December 26, 2017, Trump tweeted: “Based on the fact that the very unfair and unpopular Individual Mandate has been terminated as part of our Tax Cut Bill, which essentially Repeals (over time) Obama Care, the Democrats & Republicans will eventually come together and develop a great new HealthCare plan!” This statement is one of many made by Trump and Republicans that likely have confused a lot of people regarding the actual status of the ACA.

Furthermore, the Trump administration started pushing, via executive orders, low-cost health plans not compliant with the ACA. This means that an individual could elect to purchase non-ACA compliant coverage options the Trump White House has directed health agencies to implement, and not pay any tax penalty. As seen above, after some of these low-costs and low-benefits alternative plans were put in place by the Labor Department, 12 states sued the federal government. Given this ongoing litigation, the status of these plans is unclear, adding to the confusion.

The Trump administration has also ensured that the ACA no longer benefits from advertising and outreach efforts to explain how to enroll, what benefits to expect, and how to navigate the websites to prospective buyers. As seen above, 90% of the funds for advertising and outreach to the ACA exchanges were cut in 2017. It is also important to remember that 16 states, all led by Republican governors, have refused the very popular extension of Medicaid provided in the ACA. This extension is funded at 100% during its first few years by the federal government, so governors who have opposed this extension are denying fellow state citizens their share of federal dollars that could have been allocated to their state. Obviously, these state governments are not engaged in any type of effort promoting enrollment and information about the ACA, including its November 1 to December 15 enrollment period.

First, the good news: despite all the Republican efforts to undermine the ACA, Obamacare remains very popular, and enrollment remains very healthy. Can more be done?

To increase awareness about the ACA, one has to rely on the health departments on the 34 states (plus the District of Columbia) that have expanded Medicaid, and local efforts by hospitals and health insurers, who can serve as an important link to ACA health coverage.

Hospitals support the ACA: They have a legal obligation to treat uninsured patients through their Emergency Departments, a very expensive proposition since those are staffed by physicians trained to save lives in emergency situations, not to act as general practitioners for the uninsured. Therefore the fewer uninsured there are, the better for hospitals. Plus, hospitals and physicians are trusted by most.

Insurers too want more patient insured. This is why the “repeal and replace” efforts by the Republican Congress in 2017 achieved the rare feat of triggering unanimous opposition from the whole medical sector, hospitals, health insurers, associations of physicians, etc. Local NGOs helping patients navigate our complex health care system and the ACA exchanges are also lining up to supplement local outreach efforts by states and health providers.

First, they should get as much advice as possible: from their physicians, local hospitals, and local associations helping promote the ACA.

Second, they need to learn to navigate the ACA websites; again if possible with the advice of colleagues, friends, and medical professionals they know.

Third, they should keep in mind a key, and counterintuitive feature of most ACA websites, which can lead to an unwarranted “sticker shock.” The first quotes for coverage one will see do not take into account the subsidies one is likely to be eligible for. These subsidies have not been touched by the Trump administration, and provide protection against potential nominal price increases first seen on the website. Therefore health insurance buyers should go through the whole journey on their ACA web site, keeping in mind that the actual, real price they will pay is not what they will have seen quoted first, but what they will see at the end, when those subsidies have been factored in. Navigating these sites is not easy, so again insurance buyers should get all the advice and help they can garner.