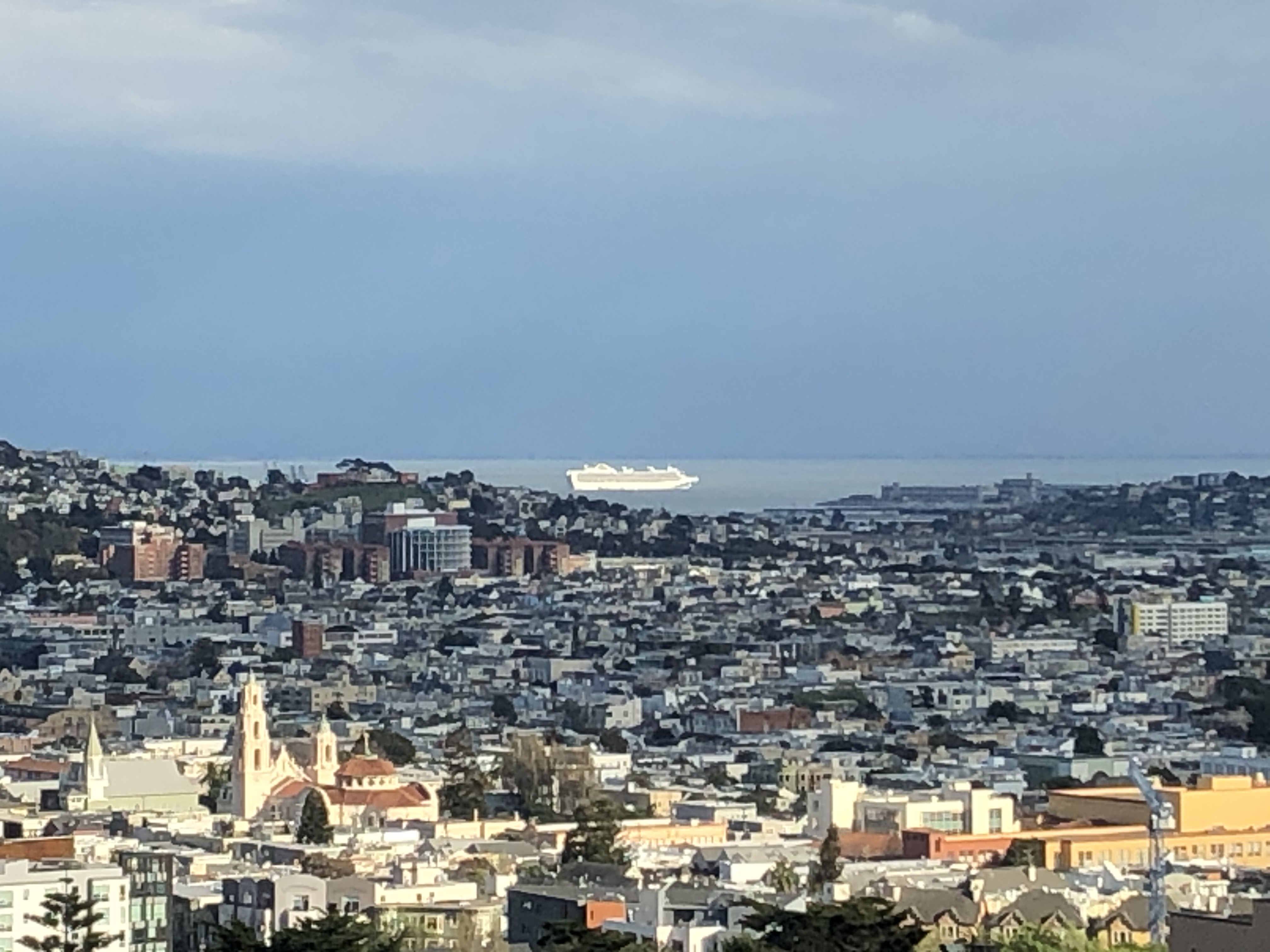 A Week in March in the U.S. During the Coronavirus Pandemic

A Week in March During the Coronavirus Pandemic

Several recent studies have shown the “infection adoption” curve at the outset of the Coronavirus pandemic to be very similar in China, South Korea, Italy, Spain, France and Germany. Apart from timing (China and South Korea now show declines in the number of cases; Italy and Spain are peaking; France and Germany will do so in two weeks; and the U.S. in late April), the only thing that changes is early preparedness:

Analyses on the speed of propagation of the virus show that if everyone keeps the same amount of 50 or so daily “encounters” with others (e.g. in the supermarket you “encounter” at least 10-15 people every time you go there) as before, then in one month essentially the whole population is infected – exponential growth. This is what happened in Wuhan, China, and then in Italy—both with populations around 60 million people.

If on the other hand these person to person live interactions are reduced down to 5-6 per day, then the number of infected people “flattens out” in the high tens of thousands. This is why “flattening the curve” is so important: It makes the difference between exponential growth of the people infected (and an overwhelmed health system—Wuhan and Italy, again), and a more manageable number of cases, in the high tens of thousands for countries with the populations of France and Germany. Note that extrapolated to the U.S., where we have 5 to 6 times as many people, this would still mean hundreds of thousands of patients with the virus. But not millions, which is what could happen under an “exponential” scenario.

Let’s be a little more specific: What does “exponential rate of growth” mean? It means that the number of cases doubles every two days. After eight days, little more than a day, the number of cases has multiplied by sixteen, etc. These are the actual number of cases: As we have seen first in Wuhan and then in Italy, that exponential rate of growth overwhelmed local testing abilities, which meant that officials had visibility on much fewer cases, because they could not test fast enough, limiting also their ability to act. But the death rate did not wait for testing to ramp-up, and grew very fast as well. We saw a mini version of this story in our own Washington state, where at the outset of the crisis they had many deaths relative to the number of affected people—because they had not started testing in high numbers and therefore the number of actual patients with the virus was much higher than what was being reported officially.

What happened in Washington state? A strong concentration of cases in one retirement home, then another—lots of older, more vulnerable people all in the same closed place, the ideal propagation vessel for the Coronavirus. Cruise ships, as the one moored for days in Yokohama, Japan, are also ideal propagation “vessels.” In South Korea, a church with hundreds of worshipers was also a concentration of people that prompted an exponential propagation of the virus.

This also shows that, unfortunately, the only reliable statistic is the number of deaths, because in many countries there are not enough tests available to cover all of those who should be tested. This is particularly true in the U.S. at the moment. The ratio of deaths to the total number of people having the virus does not fluctuate widely: It typically stays within a range of 1% to 4%—assuming the amount of testing is not overwhelmed by the needs of attending to the sick, like in Italy. Italy has most likely a lot more cases than officially shown (because of lack of testing), given their 2,000 or so death toll thus far. With the lack of testing in the U.S., we are likely to see something similar here, again within the next 4-6 weeks, with casualties ramping up faster than our number of cases would indicate.

Now what does the “flattening of the curve” achieve?

First it reduces the number of active cases. With social distancing, other key containment steps and making sure all cases are identified early and quarantined, the growth of cases can “flatten,” and reach only a fraction of what would happen in an exponential growth scenario.

Second, with a lower number of cases there is less risk that local hospital systems become overwhelmed: This means that all patients with the virus can have access to a hospital bed; more importantly, to a respirator if they need one; and to proper intensive unit care. Statistically this can reduce the rate of death from the 4% observed in Wuhan to the much lower rates observed in well prepared countries. Here Japan comes to mind: They were early in terms of timing of the pandemic (remember the cruise ship mentioned above in Yokohama? That was weeks ago), and now they are not much in the news—a good thing—with a death rate of about 1%, quite an achievement.

This is essentially why our government officials, first from key states like New York and California, and now (as of 3pm ET) from the federal government, are telling us to stay at home; avoid any encounter with more than 10 people, including in public transportation; eschew bar and restaurant outings; and leave home only to get groceries or pharmaceutical products. Soon, we will know if those steps were taken soon enough to “flatten the curve.” Here, it is worth noting that while Chinese authorities were slow to act in Wuhan, their eventual strong containment action there saved the rest of China (1.2 billion people!) from suffering the same consequences than the Wuhan habitants, with a much lower rate of death (less than 1%) in the country outside Wuhan and the Hebei province. China, outside Wuhan, benefited from “flattening the curve.” 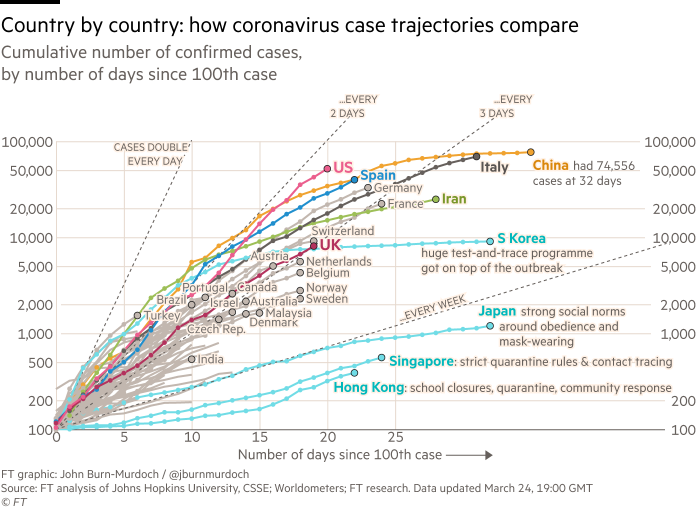 New York, the epicenter of this public health crisis in the U.S., with 50% of the country’s total Covid-19 infection cases, could become the world’s most impacted region. Despite the heroic efforts of so many state governors, led by Andrew Cuomo (D-NY), with Gavin Newsom (D-CA), Jay Inslee (D-WA) and J. B. Pritzker (D-IL) also taking charge aggressively of the crisis, and over 100 million Americans under stay-at-home edicts, no one knows when the curve will flatten… 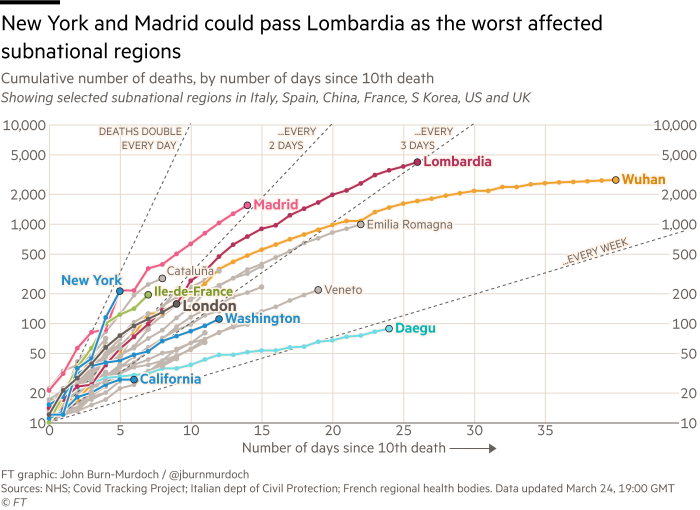 Yet, starting on March 23rd, a few voices in the media and more importantly the occupant of the White House, are already showing impatience—with less than a week of this stay-at-home regime, for only one third of Americans. These voices are essentially saying, “Wall Street has tanked; millions are newly unemployed; this cure is worse than the problem: This is not sustainable!” Next come assertions like “We will start this economy again by Easter…”

Unfortunately, this is a public health crisis, with dire economic consequences—not the opposite. Wishing Covid-19 away will not get rid of the virus, and it is hard to imagine a healthy economy with no mitigation of the public health imperatives we face.

March 24: Infection cases are still growing exponentially—which is why we have stay-at-home policies, with the economic blow cushioned by the much awaited $2 trillion U.S. government stimulus package

Ideally—a much better state of affairs than today—we would have widespread Covid-19 testing in hand already. Were that to be the case, 1) We would know precisely where the concentrations of cases are; 2) We would be able to quarantine (a stronger measure than stay-at-home) the (much fewer) people strongly affected; and 3) The rest of the population, after a few weeks of relative isolation, could gradually resume economic activities. For successful examples, see South Korea (40-50 times more tests per capita than in the U.S. thus far); Singapore; Hong Kong; Taiwan; and Japan.

However, we face the opposite situation, with very few tests available to the U.S. population, even though large scale efforts are finally ramping up from a number of quarters. Because of these very low rates of testing, we are flying blind.No one knows precisely where the specific centers of infection are, even in New York.

The exponential growth of Coronavirus cases in the U.S. makes the case forcefully for suppression, as opposed to delayed action. This is why we have “stay-at-home” edicts covering over 100 million Americans. In the absence of widespread testing, and specific data about who is infected, the number one priority right now is to “flatten the curve:” Governors Cuomo, Newsom, Inslee, Pritzker et al. should be applauded in their actions to try to get there.

If strong and decisive “suppressive” action continues, we are likely to face a sustainable period (8-10 weeks?) of economically debilitating isolation. On the other hand, not taking or sustaining these “suppressive” steps will lead to a longer down period (over several months) for the economy, and here one additional danger is that we are seeing enormous differences across our fifty states: Yes, in New York, California, Illinois, Maryland, Washington and other states, over 100 million Americans have been put in lockdown. What about the more than 200 million other Americans who live in states in which the authorities are still minimizing the threat?

This crisis has also exposed our woeful public health unpreparedness– with potential “cascading deaths,” i.e. if all intensive care units (ICUs) are taken, people die, not only of Covid-19, but also of any other illness or medical situation (e.g. heart attacks; brain strokes; aggressive cancer tumors; seizures; vehicular accidents;) that require an ICU, now. In New York, governor Cuomo is scrambling for hospital beds—he needs up to 150,000 of them when the state only has about 50,000 available today; respirators—he needs 30,000 additional ones within a few weeks, versus 5,000 in his state today; and even protective masks. Cuomo is not alone: In California, most major hospitals have appealed to the population and businesses to donate all protective gloves and masks they can find. Hopefully a tragedy due to the lack of such essential medical supplies will be averted, but it is High Noon for most of our medical personnel throughout the country! We talk about this crisis being a “war,” but in all wars the U.S. has fought our soldiers were always well equipped and supplied. It is a national shame that we are not at the same state of preparedness for our medical doctors and nurses.

Assuming we get enough medical supplies to our hospitals soon, the lack of widespread testing today (I heard of plenty of “front line” physicians and nurses who still can’t get a Covid-19 test, a real scandal) is still the “elephant in the room.” Hopefully this will stop being the case within weeks. In the meantime: Test! Test! Test! And stay safe.

In these times of grave uncertainty, we need data: Here are some reliable sources—plus an excellent analysis.