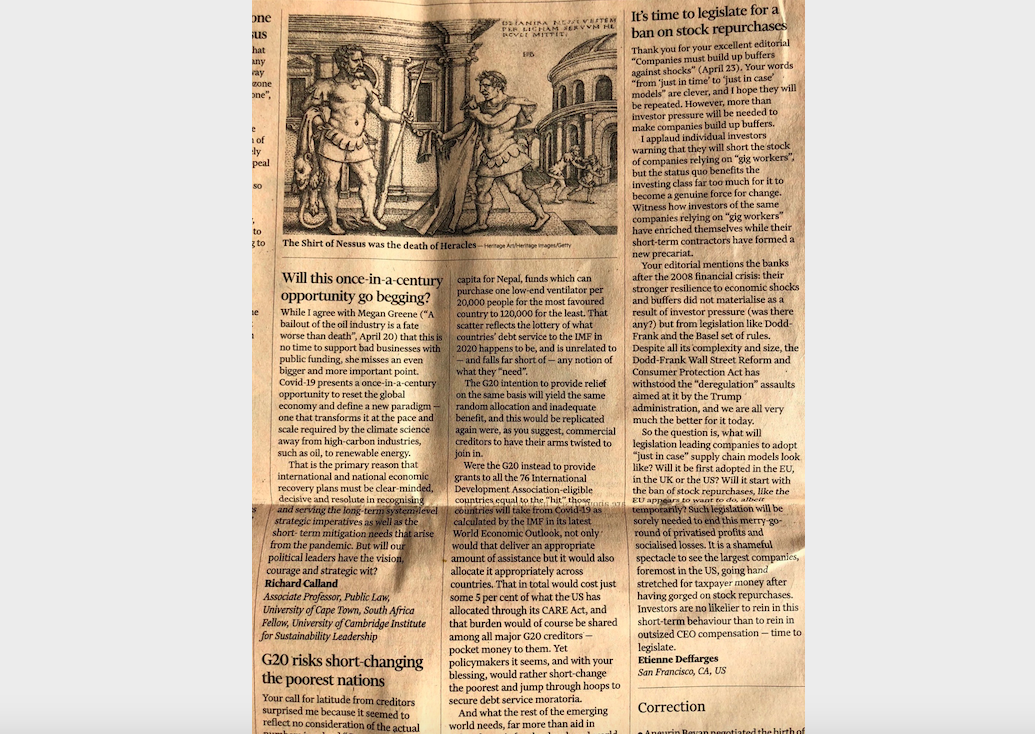 Published in the Financial Times on April 27, 2020

Legislation, not just investor pressure, will be needed to make companies build up buffers against shocks—in response to the April 24, 2020 Financial Times editorial, “Companies should shift from ‘just in time’ to ‘just in case.’ Pandemic has shown that businesses neglected vital safety margins.”

Thank you for your excellent editorial, ‘Companies must build up buffers against shocks,’ which I read in the April 23 edition of your newspaper. Your words, ‘…from “just in time” to “just in case” models…’ are clever, and I hope they will be repeated.

However, more than investor pressure will be needed to make ‘companies build up buffers against shocks.’ I applaud individual investors warning that they will short the stock of companies relying on “gig workers,” but the investing class has far too much to benefit from the status-quo to become a genuine force for change. Witness how investors of the same companies relying on “gig workers” have enriched themselves while their short-term contractors have formed a new precariat.

Your editorial mentions the banks after the 2008 financial crisis: Their stronger resilience to economic shocks and buffers did not materialize as a result of investor pressure (was there any?), but from legislation like Dodd-Frank and the Basel set of rules. Despite all its complexity and size, the Dodd-Frank Wall Street Reform and Consumer Protection Act has withstood the “deregulation” assaults aimed at it by the Trump administration, and we are all very much the better for it today.

So, the question is, what will legislation leading companies to adopt “just in case” supply chain models look like? Will it be first adopted in the EU, in the UK or the US? Will it start with the ban of stock repurchases, like the EU appears to want to do, albeit temporarily? Such legislation will be sorely needed to end up this merry-go-round of privatized profits and socialized losses. It is a shameful spectacle to see the largest companies, foremost in the US, going hand stretched for taxpayer money after having gorged on stock repurchases. Investors are no likelier to rein in this short-term behavior than to rein in outsized CEO compensation—time to legislate.

Original 4/24/2020 FT article: Companies should shift from ‘just in time’ to ‘just in case.’ Pandemic has shown that businesses neglected vital safety margins.

The Covid-19 outbreak has exposed the thin margins on which much of global business runs. Highly indebted companies, working from lean inventory, supported by just-in-time supply chains and staffed by short-term contractors, have borne the brunt of the sudden blow. They will now suffer the rolling, longer-term impact of its unpredictable consequences. Too late, many executives and owners have realised that by pursuing the holy grail of ever greater efficiency, they sacrificed robustness, resilience and effectiveness. In many cases, they will turn out to have sacrificed the business itself. As managers wrestle with how to restart production lines and restaff offices, they must also consider how to prepare for inevitable future shocks. These include not just a resurgence of this virus but different, perhaps more dangerous, pandemics, or the longer-term disruption of climate change. Like the banks after the global financial crisis, businesses will need to build thicker buffers against shocks. If they do not, governments and regulators will need to find ways to encourage or oblige them to shore up their defences. At least in the short term, investors will help by shunning fragile business models. Equity and bond markets are already discriminating sharply in favour of fundraising requests from companies with strong balance sheets and high credit ratings. Jim Chanos, the US investor, warned last month he was shorting the stock of companies that relied on “gig workers”, on the basis that the crisis would change social and political attitudes to businesses relying on this precarious workforce. Ideally, companies should aim for what Nassim Nicholas Taleb has called an “antifragile” approach, going “beyond resilience and robustness” so that they can adapt to, and even thrive on, disorder. Recommended AnalysisThe Big Read Coronavirus: universities face a harsh lesson Having survived, though, their first priority should be to rebuild cash reserves. For many businesses, this will be achieved with government help, in the form of backing for furloughed employees, loans, and direct subsidies. Some governments are rightly tying such aid to short-term restrictions on dividend and bonus payouts. The EU, for example, is planning to forbid subsidised businesses from taking “excessive risks” or engaging in “aggressive commercial expansion”. How long such constraints extend beyond the acute phase of the crisis will be one important question for governments and regulators as economies edge out of lockdown and companies start to seek competitive advantage by jettisoning cash cushions. Banks, which have learnt since 2008 to operate under higher requirements for adequate regulatory capital, share a responsibility here to help customers bring levels of gearing down. Second, companies must transform their supply chains from “just in time” to “just in case” models. The pandemic has underlined the need for suppliers and customers to work together. Afterwards, it will be up to larger survivors, in particular, to help support the smaller and weaker components of their supply chains, rather than pursuing a beggar-thy-neighbour approach that destroys the chain altogether. Finally, businesses need to reinforce the networks of people that underpin their success. This will be a challenge when many will have to lay off staff just to survive. But it is arguably the most crucial element of a post-crisis strategy. Just as companies built purely on the brittle web of the gig economy may collapse, so those that have maintained a safety net of loyal and adaptable full-time workers are more likely to pull through — and will be better prepared to ride out future disruption.

Letters in response to this editorial comment: It’s time to legislate for a ban on stock repurchases / From Etienne Deffarges, San Francisco, CA, US